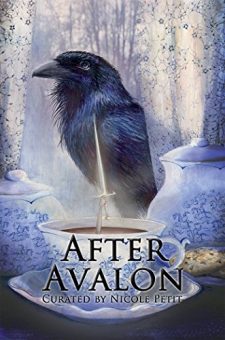 To the future, tense

The book came out in 2016 and since that time I’ve had a substantial amount of positive feedback about the story. I’ve had more than one reader saying they were moved to tears (really, the ultimate accolade), they found the story powerful, that it spoke to something in them. This is interesting because it’s 100% more feedback than I’ve had from readers on any of my other published stories. This is partly to be explained by the relative reach and marketing effort of the respective publishers, and could also be a benefit of the relatively generous wordcount. 15,000 words is a long way about the norm for short story anthologies, and I took it right to the limit, allowing me to develop the characters and their interaction more fully, but it also helps a reader become more engaged and involved with the unfolding story. However, I still don’t think this quite accounts for the reaction. Where other books have been reviewed, none of my stories evoked a similar response, and I can’t help wondering if this is down to the nature of the storytelling. I was specifically looking to tap into something more on a level of myth; more resonant with a reader’s psyche, more primordial, more emotionally powerful. And I think there will always be readers whose own responses are in tune with yours, and who therefore derive something more substantial from the story. That’s what I’m trying to achieve, on a certain level, and is what seems to have been at least partially successful in this instance.

What this means for my own writing I’m as yet unsure. The publication of The May Hawk’s Daughter lies two years in the past. At the time there were suggestions of a follow up, to be published in its own volume with a rewritten May Hawk, but often real life gets in the way and you get diverted down other paths (the story does need a rewrite because it’s essentially a first draft – I finished it just a few hours before the deadline. More to the point, it could do with a little added here and there and the whole thing tightened up). Since then I’ve been concentrating on the supernatural stories, ghost stories and a healthy dose of folk horror with a view to putting my own collection out. But one question I have to ask myself is – is this what people want, or should I write for an obvious market? It’s not a case of ‘doing something I don’t like because that’s what people prefer’ – I started out writing myth, legend and fable and I feel an instinctive kinship with the native folklore of the British Isles – it’s more a question of what I should concentrate my efforts on, and how, if I were to do both, I should present that. Which brings us back to the original question of writing cross genre, what people will accept and how to avoid disappointing fans of one type and not the other. The obvious choice is to use a pen name for different types of fiction, and this may well be the direction I go in. Current works in progress include both folk horror, supernatural and fable, so at some point crunch time will arrive. But for now – and up to the moment at which I publish something else in the myth and legend vein – I can postpone that decision and just enjoy the process. My readership may decide for me, after all.

Connolly, John 2012 All you have is language. It’s an act of respect