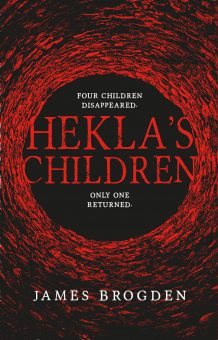 From this point Brogden weaves his plot in an expert fashion. The main characters – Nathan, Tara Doumani the forensic archaeologist brought in by the police, and Nathan’s erstwhile girlfriend Sue – are well characterised without being bogged down in detail. Nathan remains largely a broken man, both from the inexplicable disappearance and presumed death of his charges, and from the resultant police investigation that (naturally) assumed his guilt. He is subject to strange hallucinations of the missing children and flashbacks to their disappearance, while his behaviour becomes increasingly erratic as the discovery of the body, in exactly the same place, reopens old wounds and propels him back into a mystery he would rather not face. Tara is the determined professional, expert in bog bodies, whom the police rely on in their investigation, and who becomes deeply drawn into the personal madness that surrounds Nathan. Sue, a teaching colleague whose fling with Nathan was instrumental in him losing sight of his charges a decade earlier, is now married with 2.4 children and wants nothing to do with him or the past.

Brogden manages his horror tropes expertly. From the supernatural experiences, to the mounting horror and paranoia that afflicts Nathan and the initial rejection and ultimate acceptance by Tara that the things she witnesses have no earthly explanation, we believe wholeheartedly in the characters and their reactions. In the background the police investigation rumbles on, their conviction that Nathan is hiding something concerning the long ago murders only strengthened by the chain of inexplicable events and his suspicious behaviour. Following Nathan’s somewhat unwise decision to partake in a ceremony that will help him understand the situation more clearly, the horror only intensifies into a finely crafted chase narrative as Nathan and Tara are pursued by a cunning and remorseless enemy.

Up to this point the novel is a well-crafted example of the horror thriller genre, and would certainly deserve the plaudits it has gained. Nathan is an excellent protagonist, riven by guilt and his inability to understand exactly what it was he saw on the long ago day his charges vanished. Tara is his unwilling accomplice – motivated initially by professional ambition and the opportunity to study a perfect ‘bog body’ first hand, and subsequently by confusion and mounting horror. Only Nathan offers her a way out of the contradictions of her impossible discovery, but Nathan is dangerously erratic and obsessed. The plot is taut, and we suffer its twists and turns with the protagonists. We know what this is about, and we know how it plays out, even if we are ignorant of the specifics. No-one wants to believe Nathan, officialdom is ranged against him, and he is prime suspect in his own investigation. Only Tara, grudgingly, comes to believe that he can offer her a way through the maze of contradictory information that has enveloped her.

However, it is when we reach the second part of the book that Brogden really comes into his own, and it is here – as outlined in several previous blog posts of mine on what happens when an author confounds readers’ expectations – that it begins to lose the enthusiasm of some readers, as it goes from a fairly garden variety chiller into full tilt folk horror, and Brogden unshackles the story from the mundane horror of police procedural, demonic pursuit and paranoia. Think Mythago Wood with added horror, and a finely drawn cast of Neolithic and / or Bronze age antagonists, as Nathan is flung into a situation he is completely unprepared for, and we discover exactly what happened to those three missing pupils.