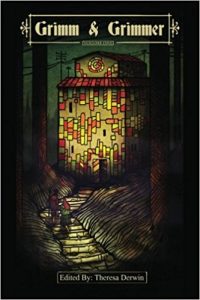 Following the success of their Christmas horror anthologies, Fringeworks looked to launch a series of retold fairy tales, taking those of Jacob and Wilhelm Grimm as inspiration.

This was an area that particularly interested me; I had begun my transition into prose by attempting to write an ‘undiscovered’ fairy tale (‘Simple Percy and the Fox’), and was keen to see if I could tackle one of the standards. In the end, I chose Hansel and Gretel, renaming the story ‘Gretel’s Way.’ I’m not a huge fan of updating settings to the present day, so instead I opted to write a mediaeval story in a modern idiom. It was a very enjoyable experience, and I hope I did the original justice!